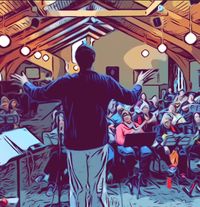 SAVE THE DATE! I'll be returning to Salt Lake City with an in-depth day long ukulele immersion class ...it will be a fun exploration of music, mindfulness and creative play. A concert is also included...can't wait to return to the sweet uke community in SLC! Details & Registration TBA

The didjeridoo is an ancient wind instrument developed by Aboriginal peoples of northern Australia at least 1,500 years ago. Its deep soothing tone has a grounding and uplifting effect, using a special breathing technique called circular breathing.   Playing the didjeridoo cultivates a meditative presence and has been shown to have several health benefits -- People who play didjeridoo report a relaxed state during and following their practice.

Participants in this workshop will be guided through a clear four step process of how to play the didjeridoo including how to circular breathe.

In addition to toning the abdominal muscles, a 2006 study reported in the British Medical Journal found that practicing the didgeridoo helped reduce snoring and sleep apnea by strengthening muscles in the upper airway.

Through yogic breathing exercises, mindfulness meditation and creative music games, participants will connect with their own innate musicality and make music in a holistic, playful and supportive community atmosphere.

No prior music experience required! Participants are encouraged to bring their own didjeridoo, hand drums, flutes and other instruments for this retreat for our community music making.

People all around the world are discovering the humble ukulele as an easy-to-learn instrument that brings music making into their daily lives for fun, relaxation and community.   Whether you're new to the ukulele or have been playing for years, at the Ukulele Zen retreat you'll receive world class instruction and how to create a deeper music practice for cultivating joy and relieving stress.

Classes focus on how to listen deeply to the present moment and “your fellow travelers” in order to approach music making from a more joyful, non-judgmental and relaxed perspective.

These practices will nurture your connection to the intuitive musician within and help you access a more relaxed technique so you can enjoy your playing for longer with less discomfort.

You'll leave the ukulele Zen experience with a treasure trove of new music skills, fun memories, and the inspiration to continue your music journey at home for self-expression and wellness.